Our Favorite Chaplains & We the Girls of the Camp 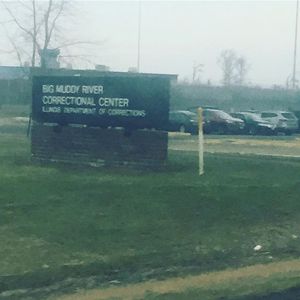 Three prisons today, and it's Day 5 of the tour. We will stop at SWICC (drug treatment prison), Graham, and Robinson Correctional. First Lady Ella met up with us again at SWICC & Graham. She was with us the other day and this time she brought something. She brought a homemade pound cake, chocolate chip and pecan cookies. That was so nice of her, and the cookies were good. We arrived at the minimum security prison and it felt like we were at a max. They didn't have my name on the list to enter, so I had to wait and go through some other stuff.

We were in the gym and the sound was great, because we brought our own stuff in. The brothers were a little laid back, but it was early. We had 66 men attend and 13 receive salvation and 28 rededicate. Some of the staff attended to kinda check us out, they enjoyed it.

We had an hour drive to the next facility, we arrived at Graham and it was one of our favorite Chaplains. The first time we were there his son was fighting for his life from a heroin overdose. And "God Over Everything" song ministered to him. We got cleared and headed to "Hope Chapel" as it was largely display from a wood design the inmate created NICCCEEE!

The men of the church were already in there ready to serve us. We got the sound hooked up and the men started coming in droves. The chapel was standing room only. It was 130 plus, filled to capacity, and they were on FIRE. I did my set and Art did the message. 22 men accepted Christ and 40 rededicated. The Gideon Crew done there set, and at the end the Holy Ghost showed up. E.D. started ministering and men started crying and a brother shouted all over the place. We put on "Consuming Fire" song and the place was on FIRE. It was time to go, but God was doing something. So, the Chaplain came up to dismiss and couldn't. He began to preach and say "He needed this, and it's hard being a Chaplain", God done something to him today". We greeted the men and had to get going to Robinson.

It was another hour drive, we ate sandwiches and snacks in the car. We arrived for the evening program 6:00p-8:00p. Our other favorite Chaplain is from Kenya and he is short brother with a FIRE from God so strong. He was happy to see us and got us over to the gym. The men came in and filled the room. It was 85 men that attended. This program was powerful, Art preached the gospel and got all on the floor with it. You could tell most of these brothers were believers how they responded. 19 received salvation and 34 rededicated.

On my set the Chicago Steppers showed up. 3 men came out to the front of the gym with me and were KILLING IT! I think we should have a Stepping Contest in the Prisons hmmmm? The Gideon Crew had them rocking out and it was a battle between both sides on God Over Everything and I Got Game.

The Lord moved at the end of there set as well...if we had about 10 more minutes something powerful would have burst forth. God moved however, we had to leave. The Major on Duty gave the Chaplain the word, and we looked up he had is coat and hat on :). I was greeted at the end by "The Girls of The Camp" is what they told me they were and wanted to shake my hand! OK. We ended the night a Monocali Pizza Restaurant next to the hotel. We did our dance party in their parking lot.

Stay with me fore the LAST DAY of the tour!